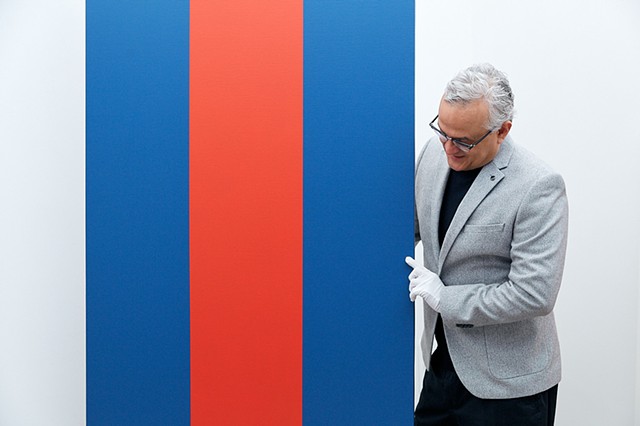 Juan Bolivar is a Venezuelan born British artist and lecturer in Painting at the University of the Arts London. Bolivar graduated from Goldsmiths College in 2003. His work is included in The Government Art Collection, and selected for significant exhibitions such as New British Painting, John Hansard Gallery, University of Southampton (2004), East International at Norwich School of Art (2007), Nanjing International (2015) where he was a prize winner, and has twice been a recipient of a Pollock-Krasner award (2001/2009). He is a contributor to Turps Magazine. Recent residencies and exhibitions include Macro Museum, Rome (2019), Bauhaus Museum, Dessau (2019) and Bauhaus-Universität Weimar (2021).

His paintings negotiate the tension between meaning and form. He combines elements from disparate sources to investigate hybridity, language and abstraction. Bolivar's work often re-enacts seminal cannons of modernist painting such as Kazimir Malevich's 'black square' or paintings from Malevich's late period; using this context of interpretation to create new meanings from the sublime to the ridiculous.

As an independent curator he has worked on over 50 exhibitions with a focus on multidisciplinary practices and polysemic cultural dialogues. Between 2001 and 2005, Bolivar curated and organised ten independent, contemporary art exhibitions in temporary locations in London under the banner of TRAILER.