Portfolio > Bat Out of Hell 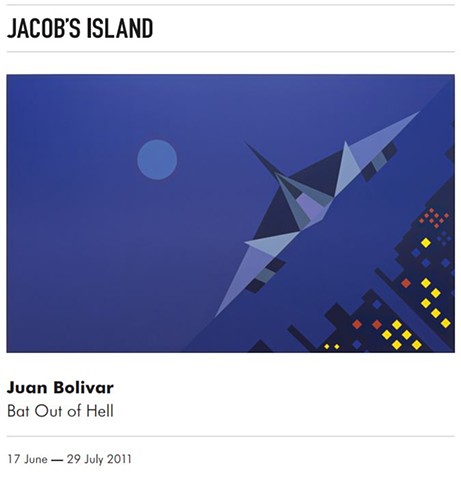 Jacob’s Island Gallery is pleased to announce its inaugural show with a solo exhibition by Venezuelan born artist Juan Bolivar. Bolivar was awarded the gallery’s annual artist in residence program, which culminates with a solo show, the artist’s first in London.

Juan Bolivar’s paintings deconstruct representations, objects and vistas into simplistic geometrical configurations, which convey an essence of the subject matter through a faceted abstraction. For this exhibition ‘Bat Out of Hell’ Bolivar expands his practice by extracting images of abstraction within art history and placing them into his interpreted war scenarios culled from contemporary culture. By incorporating familiar abstract paintings into his work Bolivar comments on the strength of symbols and motifs, which are adopted to express power and freedom.

All the works in the show appropriate notions of conflict, art, abstraction and war, and are rendered in a comic strip or computer game aesthetic which alludes to a participatory engagement of war as a desensitised form of entertainment. This is accentuated by a singular sculpture of a joystick, the object and conceptual control unit presumably used to navigate the vehicles and spaces within the paintings that we are presented with. The paintings’ titles reference rock music and the age-old tradition of using sound and rhythm to motivate allies and intimidate the enemy. The musical titles examine the relationship between this genre of music and its contentious use during interrogations in Guantanamo Bay, alongside its recent use in ‘homemade’ YouTube war footage depicting American troops going to war in Iraq and Afghanistan to the soundtrack of heavy metal and rock.