Portfolio > Back in Black 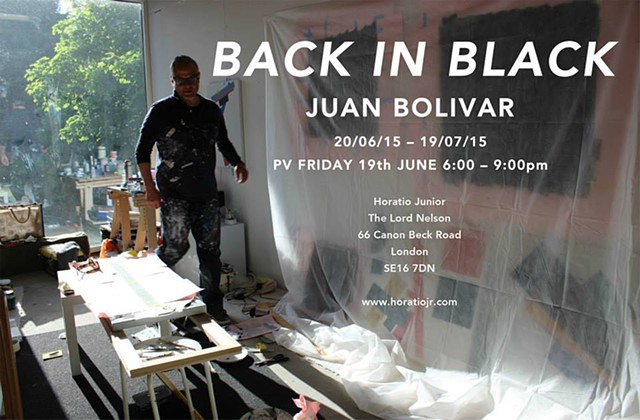 For Back in Black Bolivar reappropriates Malevich´s iconic works spliced with with hard-rock imagery inspired by AC/DC´s seminal album of the same name. Bolivar uses the ten tracks from the album 'Back in Black' as a starting point to produce ten new works in response to the recent Malevich exhibition (Tate Modern, 2015). In doing so, he examines the problematised area of post-conceptual painting and the reading of multiple signs.

Malevich painted his first Black Square 100 years ago. Shortly after completing his fourth and final version in 1930, Malevich’s work was vilified by Stalin, who described this as “bourgeois” art. His paintings were confiscated and Malevich was forbidden from making and exhibiting further works. Malevich responded by saying that “art can advance and develop for art’s sake alone. Art does not need us, and it never did.” On September 20, 1930 Malevich was arrested and imprisoned for six months. On his release he was given three choices: (1) he could leave the country; (2) he could work in solitary confinement; or (3) he could become a 'realist' painter. Taking the third option he completed some late portraits, including a self-portrait wearing a Renaissance costume, and a portrait of a peasant woman - her arms extended holding an absent child. However, Malevich signed both of these portraits with a small black square on the bottom right corner, defying the impositions made upon him by the Stalinist regime. AC/DC released their biggest selling album 'Back in Black' 25 years ago. It was recorded at Compass Point Studios in the Bahamas. The album is homage to Bon Scott - the band's former lead singer - who died of hypothermia in a car in East Dulwich after a night´s drinking in Camden Town in February 1980. The album 'Back in Black' features Brian Johnson, a charismatic Geordie who auditioned only weeks after Bon Scott's death. The album is a legend of rock mythology: upon arrival to the Bahamas, the band´s equipment was detained by customs and replacement equipment had to be shipped from the UK. They then encountered electrical issues during recording, and fantastical stories of tropical wildlife crawling over the equipment. Brian Johnson in particular felt immense pressure during the process, having never recorded with the band before, and wrote the album's lyrics in a matter days while the brothers Malcolm and Angus Young composed the music. Johnson struggling to adjust to the environment, references the bad weather conditions on the opening lines of 'Hells Bells' ("I'm rolling thunder, pourin' rain. I'm comin' on like a hurricane. My lightning's flashing across the sky…"). The band went on to complete the album in seven weeks, which has sold over 50 million copies to date; second only to Michael Jackson´s 'Thriller' in worldwide sales.